Perhaps you thought we were gone? Two years feels like an eternity in these fast-too-fast times when epic conflicts have a full arc over a weekend, 140 characters creates volumes of commentary and opinion, a day seems like forever when you are refreshing a screen over and over. This project is the opposite of this spirit. Herein we hope to share themes that are fuller in scope, that merit reflection and contemplation. We intend to plant seeds and to care for them as they flower, mature, and decay. The half lives of our pleasures, concerns, and conflicts should be measured in decades and not in the blink of someones eyes or even the length of time the average radical stays active. 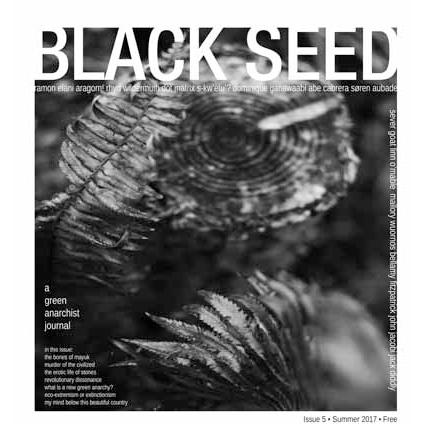 Welcome to issue five of Black Seed. If you have not seen or heard of us before let us introduce ourselves. We are a small collective of green anarchists who publish a paper-only (or at least paper first) publication intended to broaden and intensify our perspectives. We differ from green anarchist positions that precde us because we have a deep concern about positive political programs (however they are dressed up), the ability of our people to achieve them, and the efficacy of a revolutionary mindset in the first place. Pointedly, we feel as though the academic arts (anthropology first among them) are too mired in the gauntlet of what it takes to become a practitioner to take seriously. This is not to say that we aren’t willing to learn about people, the past, or whatever but that the citation of sources, and the othering of people or their superior lifeways is not how we believe a green anarchist perspective begins. But it does begin, mostly by conversations with each other, with people who may also be anarchists but don’t use the term. Our experience is that those who are most likely to share our attitude towards an earth first, anti-authoritarian, and anti-ideological perspective are people who are also indigenous. Indigeneity is a confusing smear of bodies, practices, and conversations that we know will continue to inform Black Seed.

This issue dwells on these building blocks. New editor Ramon and I write new manifestos contemplating what it means to be a green anarchist in a post-manifesto age. What does it mean to have a politics of pacing and contemplation rather than one of being in such a hurry all the time. What does it mean that the world is coming to an end, forever. Finally but perhaps most importantly what is the role of violence in our movement (cough) today and in the ushering of a new one? Anarchists have always been the party of imagination but also of morality. Violence cuts through both of these gordian knots but to what end? These are the questions that are attempted to be answered in issue five of the Black Seed.

How to Get a Copy

You can get a copy of our paper at Little Black Cart.